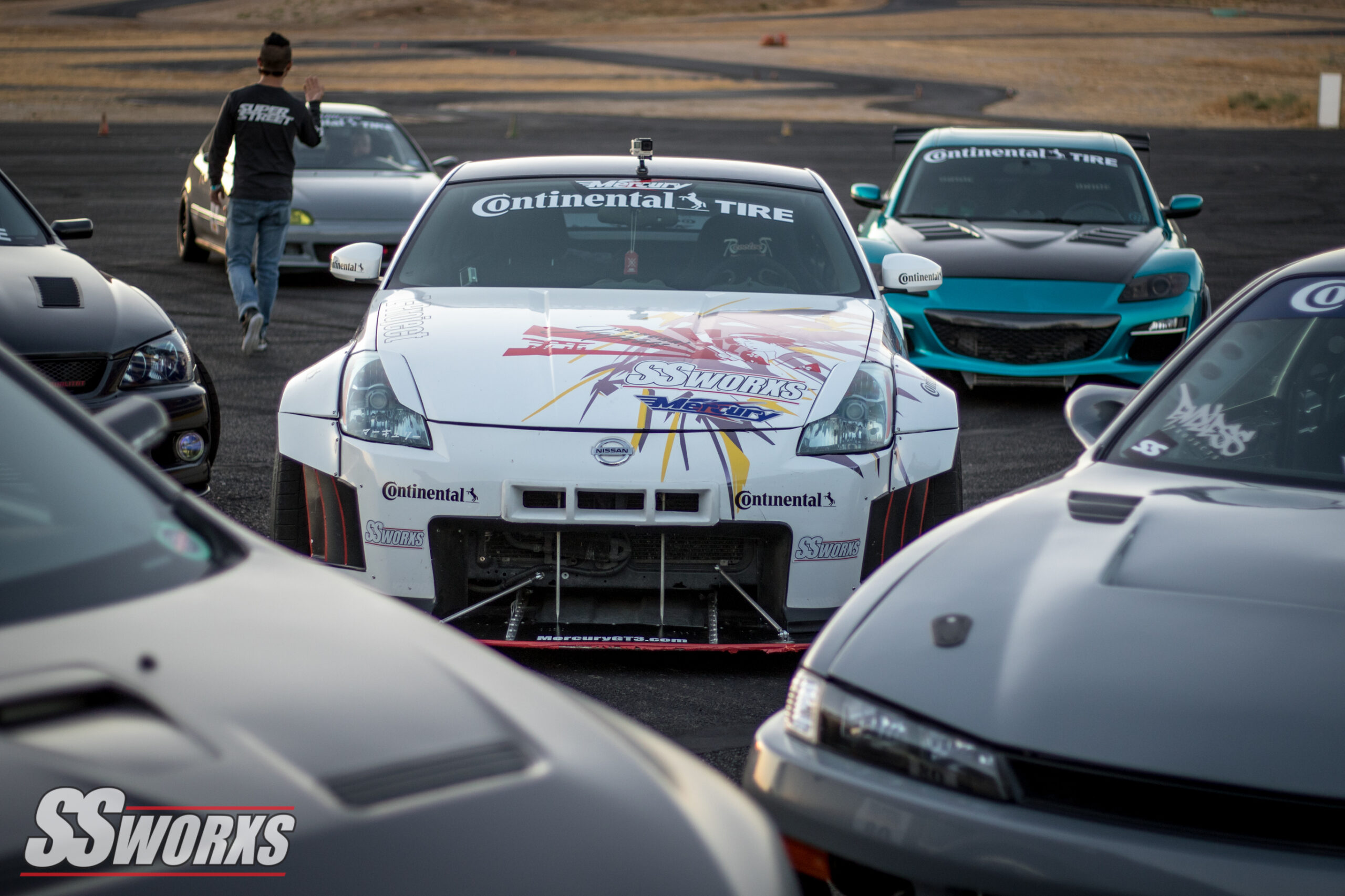 Super Street Hosts the event for show car shootout with Continental tires and last year ran it on Streets of Willows at Willows Springs International Raceway. One of funnest parts of building a car is also having to put it on the track . Put it to the test and push the car to the fullest. Continental Tire shoot out hosted for Few years already by Super street and Continental Tires we were able to be invited this year. There was a ton of Entries and only 9 was be able to get invited. and Many thanks to the super street guys for the hard work to make it happen. and to Jofel Tolosa!

We enter our Demo Mercury Nissan 350z car for this event. One of the Drivers was Dennis Houth from SSworxs.

Prior to the Event, continental tires sends out tires before hand so you will have to mount your setup for the track day. We have on the Nissan 350z Extreme contact sport tires for Free to use for the show car shootout. Tire size is 275/30/19 tires. A good and wide setup with the Mercury GT3 kit with the Fenders running 80mm wide!

Before the Shoot out we also took the Mercury GT3 car to Fontana Raceway on Sunday for a Quick shakedown. It was quite successful. Events driving from nor cal to so cal is a difficult feat if you are also driving your car home after a track day. Also going back home the same night! Nissfest 2017 updates coming soon

Getting Gas at the pilot is always a must and coffee breaks! definitely one of the better gas stations for convenient stops.

Finally arriving at Willows springs International Raceway , We had to get all of our stickers and door cars and also a quick wipe down of the car before hand.

This time around , everyone was preping for the track day setting up what they need and get everything 100% check before its ready to go on course. Also Joining the Shootout was the FF challenge , quite a bit of entries from them showed up and Not only Hondas were in this battle.

Hasport also was in entry with us and made it with a Honda CRZ setup ,

There wouldnt be a Track day without a drivers meeting with everyone on board . Always have to make sure each driver is well aware of rules and being safe on track while having fun.

The paddock was full of cars ready to go out and the FF challenge guys were up first!

The Show Car was up Next!

Being able to slide around course was definitely great! buring up the set of Continentals

Fastest guy of the FF challange claimed to take his award afterwards.

Afterwards was alot of down time for photo shoots with everyone cars and interviews one on one!

This event has a bit of everything and was able to get Great amount of seat time.

equip with a sr20det engine full tomei and Vertex kit is one of the cleanest out there.

First to line up for a group photo was the show car shoot out . Sun was setting but was able to catch a few shots before it was dark!

Until next time! we hope to come back next year for a future track event!

Credits for Super Street on Photo .

Times are posted on